Tourism marketers who like to stay on top of these trends and crunch the numbers can follow these reports which measure the direction and pace of travel volume to and within the U.S. on a monthly basis.

These indicators will be closely watched in the next report, the first one to show the impact of the coronavirus outbreak on the U.S. travel industry.

According to Senior Enterprise Editor Andrew Sheivachman, who has crunched the data for his “Skift Take,” it looks like the U.S. travel business is in for a rough year coming up.

Those who closely follow the monthly travel trends index released by the U.S. Travel Association will know what he means by examining the May 2019 numbers.

Skift reports, “The group’s data show that the end of the year may prove tough for the industry, with year-over-year growth becoming essentially flat in November which is expected to boast just 2 percent growth.

What’s most worrisome is a decline in expectations for international inbound travel, which reflect the potential for little to no year-over-year growth for the remainder of the year.”

It’s a bit of a downer, but it’s best to be fully informed, so get the rest of the sobering data here.

IPW, then known as the International Pow Wow, began 50 years ago in 1969 at the Commodore Hotel in New York City when 69 travel suppliers met with 67 buyers from 10 European countries.

Sounds like inbound tourism could use a boost, as Oxford Economics recently released data indicating international numbers to the USA are stuck in a slump. (A score of 50 means no change, a score below 50 means slowdown, above 50 means positive growth.)

In 2018, Chinese tourism to the US dropped for the first time in 15 years. The 2.9 million visitors from China represented a 5.7% decrease from the year previous. Read more here.

March 2019 overall international visitation was down by 5.4%, the worst showing since 2015.

Meanwhile, at a time when the US is losing international travel share, Destination DC CEO Elliott Ferguson takes on the role of national chair fo the U.S. Travel Association. He voiced concerns this month at a Travel Rally in the nation’s capital.

“Be it tariffs on China or walls being built in Mexico, those are not things that are resonating in a positive way,” Ferguson said. “Therefore, we continue focusing on U.S. Travel’s need to interface with members of the Cabinet, folks on Capitol Hill to get them to understand the importance of the economic impact of travel.”

Ferguson added that while Trump is clearly focused on safety, he’d like to see messaging along the lines of making sure that “how that’s delivered does not deter potential visitors from coming to the U.S.” Read more here.

Oh, buoy. Florida. In this follow-up to an earlier news item (see sunscreen controversy in The Travel Vertical, 3/25/2018), Skift takes a closer look at what’s going on in Tallahassee. Read more in “Visit Florida’s Future is Up in the Air (Again).”

A raft of states has been extending their gambling provisions, aiming to benefit from a Supreme Court decision in May 2018 to legalize sports betting. Louisiana, Pennsylvania, Illinois, and New Hampshire are demonstrating an appetite for getting into the game.

Meantime, New York State Governor Andrew Cuomo showed disinterest, saying, “Sports betting, first of all, does not make you that much money. New Jersey has sports betting, it’s on TV all the time. You can’t turn on the darn TV without seeing it. They raised something like $13 million dollars—$13 million dollars is a rounding error in our state. So, I don’t even think the economic benefit is there.”

The “State of Sports Betting” is an interactive map with updates on the status in all 50 states. Click here to play.

Sweeping changes? The state’s tourism office could soon be turned into a quasi-governmental agency (see The Travel Vertical, 2/18/2019). Legislation authorizing the change has passed both chambers of the Indiana General Assembly and is now headed to Governor Eric Holcomb’s desk. House Enrolled Act 1115 creating Indiana Destination Development Corp. would replace the Indiana Office of Tourism Development, with a transition date set as July 2020. A report recently released by the IOTD says total visitor spending in 2017 reached a record high of $12.7 billion, creating $9 billion in economic impact.

Hawaii Tourism Authority has re-allocated an additional $2.5 million in support of ongoing marketing efforts on Hawaii Island to boost tourism from Japan and the US following the volcanic eruption of 2018.

The New Orleans Advocate headline asks: “What’s Fair Use of Tourism Dollars?” The newspaper reports, “The contentious debate over how to use New Orleans tourism tax dollars that rumbled along largely behind closed doors spilled out in public…” The YouTube video of a community debate runs 2.5 hours…but in a nutshell, city officials are concerned that less than $19 million of the New Orleans hotel taxes of $200 million are going toward repairs of an aging city infrastructure that they say would benefit both residents and visitors.

Meantime, Nebraska (the “Least Likely State to Visit”) aims to make money on mugs. With a vote of 40-0, lawmakers gave first round approval to legislation that authorizes the Nebraska Tourism Commission to sell promotional products associated with statewide marketing campaigns. Last summer’s attention-grabbing “Honestly, it’s not for everyone” tagline (see The Travel Vertical, 10/23/2018) will be appearing on T-shirts, coffee mugs, and more. Pending the governor’s (likely) approval, the commission will be able to contract with private vendors to produce, sell, and distribute branded merchandise.

Meanwhile…The predictive Leading Travel Index prepared by Oxford Economics and published by the US Travel Association is a sluggish one at the moment. The report released on April 2, is projecting a slowdown with dwindling tourism numbers, both domestic and international. Click here for more details.

“The international travel market is ultra-competitive, and the U.S. is falling behind.”  – Roger Dow, CEO of U.S. Travel Association (USA Today).

“It means that we are seeing substantial declines in international travel. Our concerns are being realized.” – Adam Sacks, president of Tourism Economics, Oxford Tourism Economic Group (USA Today).

About 700,000 (or 4 percent) fewer international tourists arrived in the U.S. during the first three months of the year, including:

* Consumer sentiment data from the Conference Board provide a long-term trend of consumer attitudes that can be tracked with future travel patterns; online search and bookings data provide a window into traveler planning based on data from ADARA and nSight, and data from ARC (Airlines Reporting Corporation) measures bookings. 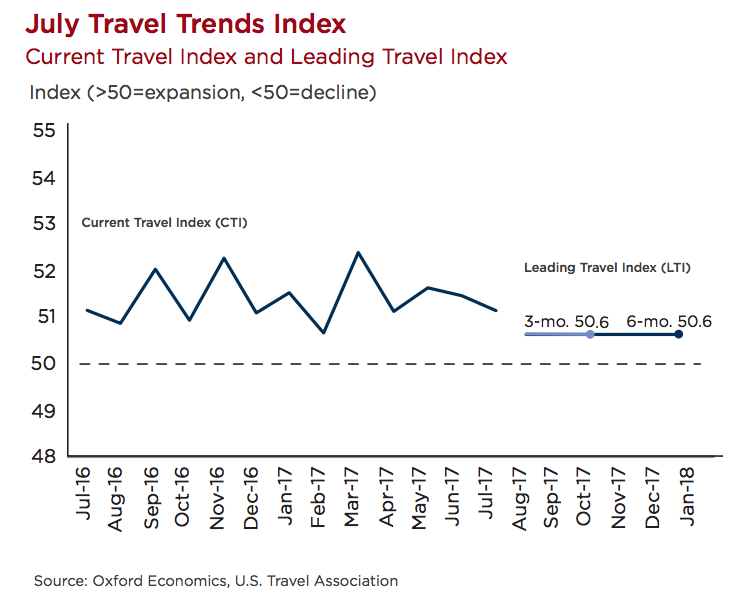