Dragon Trail Interactive, a travel-focused digital marketing agency with a deep understanding of the Chinese outbound market, has published a briefing paper (updated Jan. 28, 2020) for the tourism industry which:

As with previous public health challenges, U.S. Travel will continue to keep our industry informed at critical moments.

Good news for those who act now. Experts are saying that the overall international inbound travel market and China, in particular, will soon be shaking off the drowsiness of the past two years.

Shari Bailey, VP Connect Travel & General Manager of Connect Travel Events noted that, “A review of some key facts, along with a quick citation of what some major industry professionals are telling us about the market recovery for the international and Chinese sectors should be a signal for those serious about doing tourism business.”

But there’s no need to jump on a jet. “In fact,” said Bailey, “you should stay visible in the market and our travel shows are a great way to do that in the most economical terms, without even leaving the U.S. China is a long game and consistent visibility is absolutely key.”

• Zhihang Chi, VP-North America, Air China, said last month at the International Aviation Club of Washington D.C., that the U.S.-China trade war and poor relations have contributed in the decline of air travel between the two nations. As reported in Air Travel World, Chi said, “…There have been some hiccups, but right now, both countries want to hit the reset button and talk things over … my belief is that issues will probably be resolved, because I can’t envision a situation whereby the two countries are decoupled from each other.”

• In his remarks at Connect Travel’s recent RTO Summit Florida in Orlando, Owen Teng, director of operations for Orlando-based New Creative Tours, Inc, explained that much of the anxiety over and weaker performance of the Chinese market had to do with the Chinese government’s warning in May 2019 (and the previous year as well) to travelers to be wary about visiting the U.S. because of violence and anti-Chinese sentiment. But, he added, “Remember, it’s still a new market. Don’t give up. Everything will come back.”

• Daniel Shen, President of Los Angeles-based East West Marketing Corp., advisor to destinations and suppliers regarding the Chinese market, said, “It’s mostly about the trade war between the U.S. and China. Everybody is aware of it.” In an interview with Inbound Report, Shen was quick to point out that even with a 5.7 percent decline in 2018 vs. 2017, “Remember, 3 million Chinese did visit.”

Our Universities Are a Draw

Because Chinese student enrollment—especially at the undergraduate level—is a big driver for arrivals in the shape of parents and extended families, this is a trend to watch.

One cheerleader is the Institute of International Education (founded 1919) and Open Doors Report, which IIE has published since 1948 in partnership with the U.S. Department of State’s Bureau of Educational and Cultural Affairs. The study reports the U.S. as competitive and a strong destination of choice among international students.

For the tenth consecutive academic year in 2018/19, China remained the largest source of international students in the United States with 369,548 students (a hefty chunk of nearly 1.1 million in total) in undergraduate, graduate, non-degree, and optional practical training programs. India followed with 202,014 students.

At the recent Brand USA board of directors meeting, Tom Garzilli, CMO, explained that the organization is crafting a new marketing strategy. This will target long-haul leisure travelers; that is, the 20 million Chinese travelers who have passports, have U.S. visas and do book long-haul travel. Hence, a new China 20 Strategy is on the way. Look for details of the strategy in coming months.

While the U.S. National Travel & Tourism Office (NTTO) has forecast a slight decline in international visitation to the U.S. this year, it foresees an increase in 2020. China reflects some figures in the red, but pulling out of that pattern to reflect positive growth through 2024.

Chinese tourists and students make up the biggest chunk of spenders among all visitors to the US. However, the Trump administration’s conscious uncoupling with China in a bitter trade feud is delivering another blow by quashing Chinese tourism in the U.S.

Since the conflict erupted in early 2018, the flow of visitors from the People’s Republic has already been noticeably diminished (The Travel Vertical, 5/28/2019).

A new estimate from Tourism Economics, an Oxford Economics company, estimates the loss of another 2 million Chinese visitors, accounting for $11 billion in lost spending…and thereby, jobs.

IPW, then known as the International Pow Wow, began 50 years ago in 1969 at the Commodore Hotel in New York City when 69 travel suppliers met with 67 buyers from 10 European countries.

Sounds like inbound tourism could use a boost, as Oxford Economics recently released data indicating international numbers to the USA are stuck in a slump. (A score of 50 means no change, a score below 50 means slowdown, above 50 means positive growth.)

In 2018, Chinese tourism to the US dropped for the first time in 15 years. The 2.9 million visitors from China represented a 5.7% decrease from the year previous. Read more here.

March 2019 overall international visitation was down by 5.4%, the worst showing since 2015.

Meanwhile, at a time when the US is losing international travel share, Destination DC CEO Elliott Ferguson takes on the role of national chair fo the U.S. Travel Association. He voiced concerns this month at a Travel Rally in the nation’s capital.

“Be it tariffs on China or walls being built in Mexico, those are not things that are resonating in a positive way,” Ferguson said. “Therefore, we continue focusing on U.S. Travel’s need to interface with members of the Cabinet, folks on Capitol Hill to get them to understand the importance of the economic impact of travel.”

Ferguson added that while Trump is clearly focused on safety, he’d like to see messaging along the lines of making sure that “how that’s delivered does not deter potential visitors from coming to the U.S.” Read more here.

The National Travel and Tourism Office (NTTO) of the U.S. Department of Commerce has released a new long-term forecast. The biggest surprise may be in regard to China, which has been on a double-digit run of increases for a decade. China is expected to flatten this year, yielding a mere two percent increase over last year in inbound arrivals. (Click here for a larger PDF.) 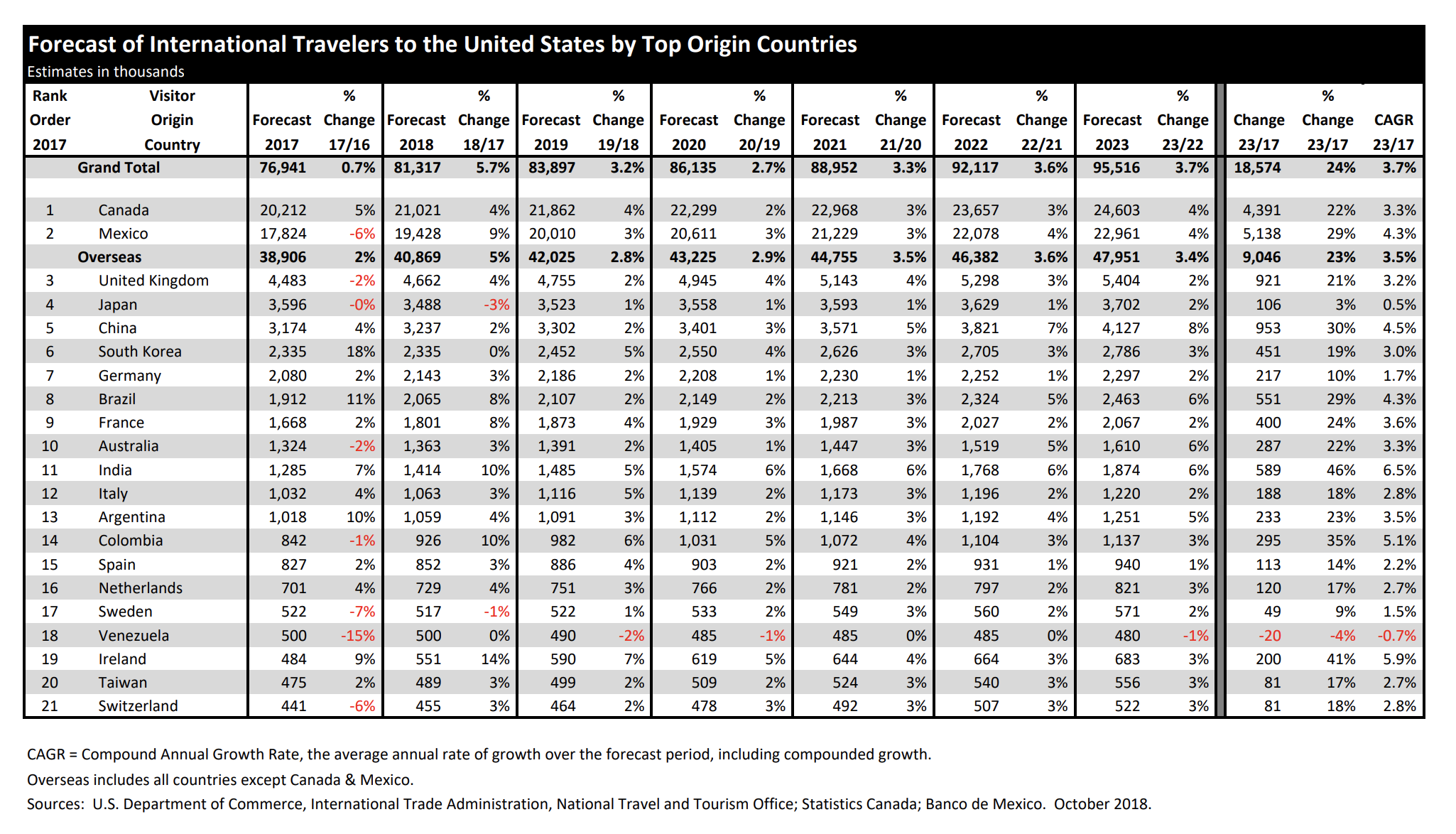 In summary, from “Inbound Report“:

—South Korea should surpass Germany this year as the number 4 overseas source market.

—While Brazil is projected to increase the number of visitors it sends to the United States over the next four years, its annual total will still be far below what it was in 2014 and 2015, when more than 2.2 million came to the US each year.

—While it will fall from number 2 to number 3, Japan will remain a stable generator of travelers to the United States, sending about 3.7 million visitors a year for the next four years.

“The U.S. travel forecast is prepared by staff in the Department of Commerce/National Travel and Tourism Office using economic/demographic/social factors, Commerce historical visitation trends, input from the DOC Global Markets staff abroad, and other numerous and varied sources. The forecast is based on a country-level, bottom-up consensus approach by a four-member forecast team. Each team member develops independent country-level estimates for the top 20 visitor origin markets based on numerous quantitative data and qualitative information. These 20 markets account for 88 percent of total international arrivals. The final estimates are based on consensus among the four team members. The NTTO multi-person, multi-factor approach reflects the lack of a strong statistical relationship (correlation) between total annual traveler volume to the United States from a specific country and any specific piece of quantitative data for that country, such as changes in real gross domestic product or currency exchange rate levels. Because of the multi-factor, multi-staff consensus approach, it is not possible to isolate the impact of any one factor on a country’s traveler volume forecast.