When Leroy Bridges dangles a trailer and a teaser in his LinkedIn feed, “We made a TV show!” the comments are pretty much all the same: “How awesome / cool / amazing is this?”

Leroy is Vice President – Digital & Communications at Visit St. Pete/Clearwater and he’s always a step ahead. He enthused a bit more in that post:

“Drumroll, please!!! Excited to share the trailer for a first-of-its-kind, scripted entertainment series produced by and for St. Pete/Clearwater, called Life’s Rewards. The show premiered at the Sunscreen Film Festival in St. Pete on May 1. This amazing project wouldn’t have come to fruition without VISIT FLORIDA and Miles Partnership.”

What Makes A Good Story?

Sure, everybody talks about “storytelling.” But what truly makes a story good? A memorable story needs a beginning, a middle, and an end. It needs action, a setting, and characters that capture audience attention. And a great story expresses elements of conflict and resolution, tension and release, mystery and revelation, losses and gains, setbacks and comebacks.

(We checked in with an expert.)

“And storytelling needs to be entertainment first,” says Ryan Thompson, Senior Vice President at Miles, who operates the in-house studio at Miles Partnership called Odyssey. “Because if we don’t tell a great story, we can guarantee that consumers won’t engage with it.”

What Makes a Good Story Great?

Ryan should know. After all, he notes, it’s no coincidence that he named his film business Odyssey that was later acquired by Miles Partnership. (P.S. Next time you speak to him, ask Ryan about this excerpt from his professional profile: “Passionate about collecting life experiences, he once stood in the Atlantic Ocean, Gulf of Mexico and Pacific Ocean within 24 hours.”)

Speaking of oceans, think of books and films that are top-of-mind for their unmistakable destination settings. From the 8th century epic journey told by Homer in the “Iliad” and the “Odyssey” to Eat, Pray, Love in 2010, which ones stick with us and why?

Back to Visit St. Pete/Clearwater

Ryan dropped us a hint on the plot. This story centers on Dan Kinney, a privileged guy who, through a series of unfortunate events, finds himself stranded at the iconic “pink palace” Don CeSar hotel on St. Pete Beach. Good news, he’s got enough loyalty points to stay for six months. “When Dan’s life blows up, he finally finds ‘Life’s Rewards.'” We won’t give away the rest.

Ryan adds, “If we get the story right, this couldn’t have taken place anywhere but this place. We covered every corner of Pinellas County to edit down to 100 minutes across eight episodes.”

How Do I Get Started?

We wondered about the right approach for destination storytelling in particular. Does one begin by filming the destination and then work in a story line?

“Actually, you must craft the story first,” Ryan explained. “Ensuring that people feel good about it is an important part of our unique approach at Miles / Odyssey. Because humans are built to appreciate conflict and resolution, the human interest elements are critical to your success as a storyteller.”

“This is a totally first-of-its-kind television show that’s entirely produced by and filmed in the destination where the story takes place, said Steve Hayes, president and CEO of Visit St. Pete/Clearwater. “It’s a new frontier for destination tourism marketing in hopes to capture target audiences via streaming platforms, which we’re confident will happen, given the show is so binge-worthy.”

Bravo to Visit St. Pete Clearwater for being the first to launch a destination-focused TV series. The question now is, “Who’s next?”

Watch Life’s Rewards! on Amazon Prime Video starting the week of May 10. In addition to Amazon Prime Video, the series will also be available on Watch.VisitFlorida.com, YouTube, GoUSA TV and Places.Travel. Written by Tom Crehan and directed by Damian Fitzsimmons.

You can watch all eight episodes here: https://amzn.to/3uzSGOB

The post-eTourism Summit survey results are in and here’s the tally on what attendees had to say about their top takeaways from the October conference. To compare these takeaway results to 2017, click here.

Case studies presented by your DMO peers and their agency partners continue to rank high along in popularity, along with networking. Due to the intimate nature of eTourism Summit and the strength of its highly creative, communicative, and connected digital tourism community, the opportunities for exchanging ideas will be a significant aspect of the 20th Annual eTourism Summit in 2019, and beyond.

And because “video, video, video” continues to rank #1, be sure to check out this link to Ryan Thompson‘s #eTS18 presentation on video marketing. See “What You Need to Know About Video Marketing,” prepared especially for DMOs. 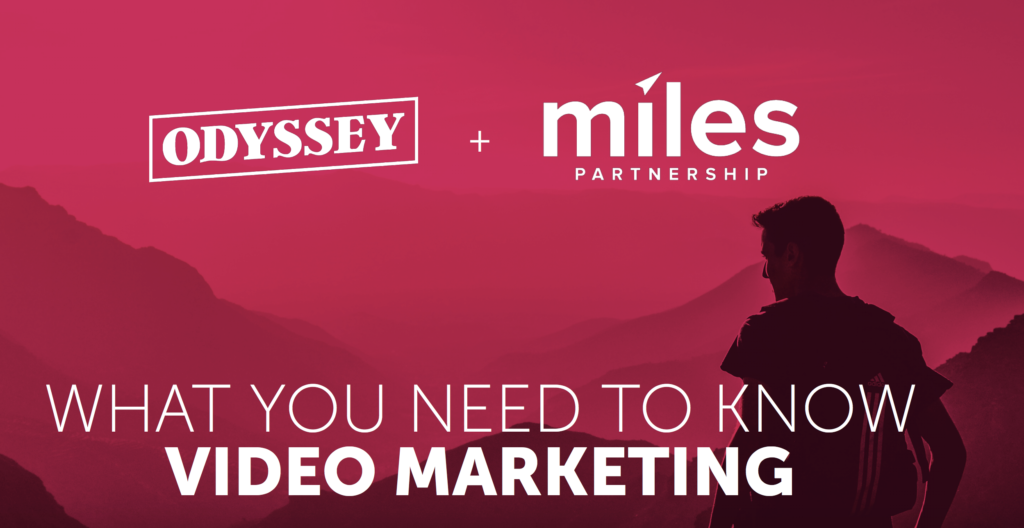 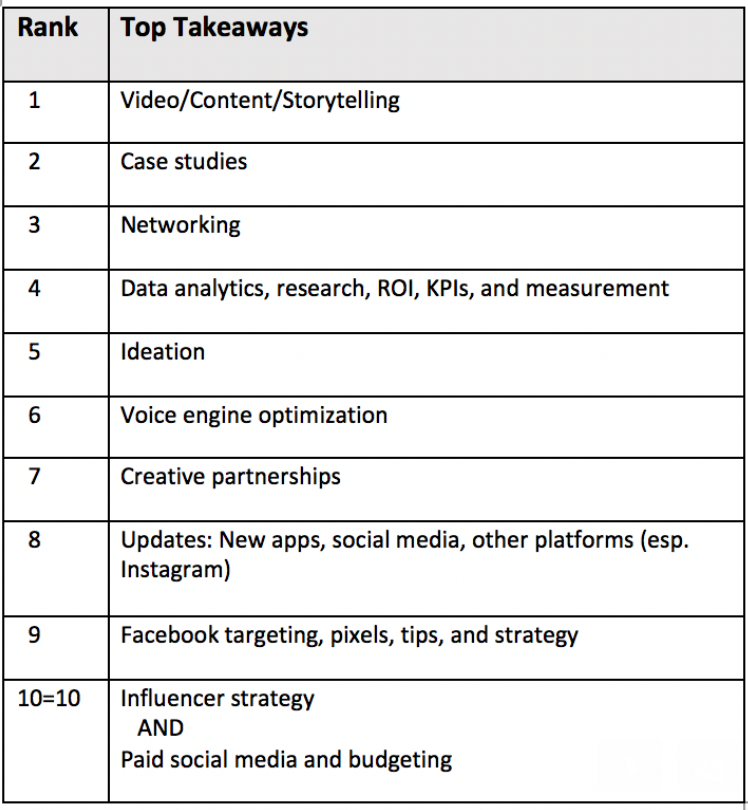 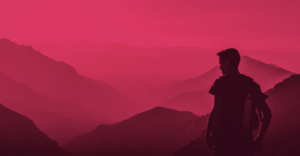 For the second year, Ryan is leading an eTourism Summit Pre-Conference Day Workshop when 24 participants will get the benefit of his instruction, taking skills back home for zero budget video production. Register for the day long, hands-on session when the streets of San Francisco become your backdrop. “Create: Smartphone Video Storytelling for IGTV” on Oct. 9, 2018 is back at #eTS18 by popular demand. 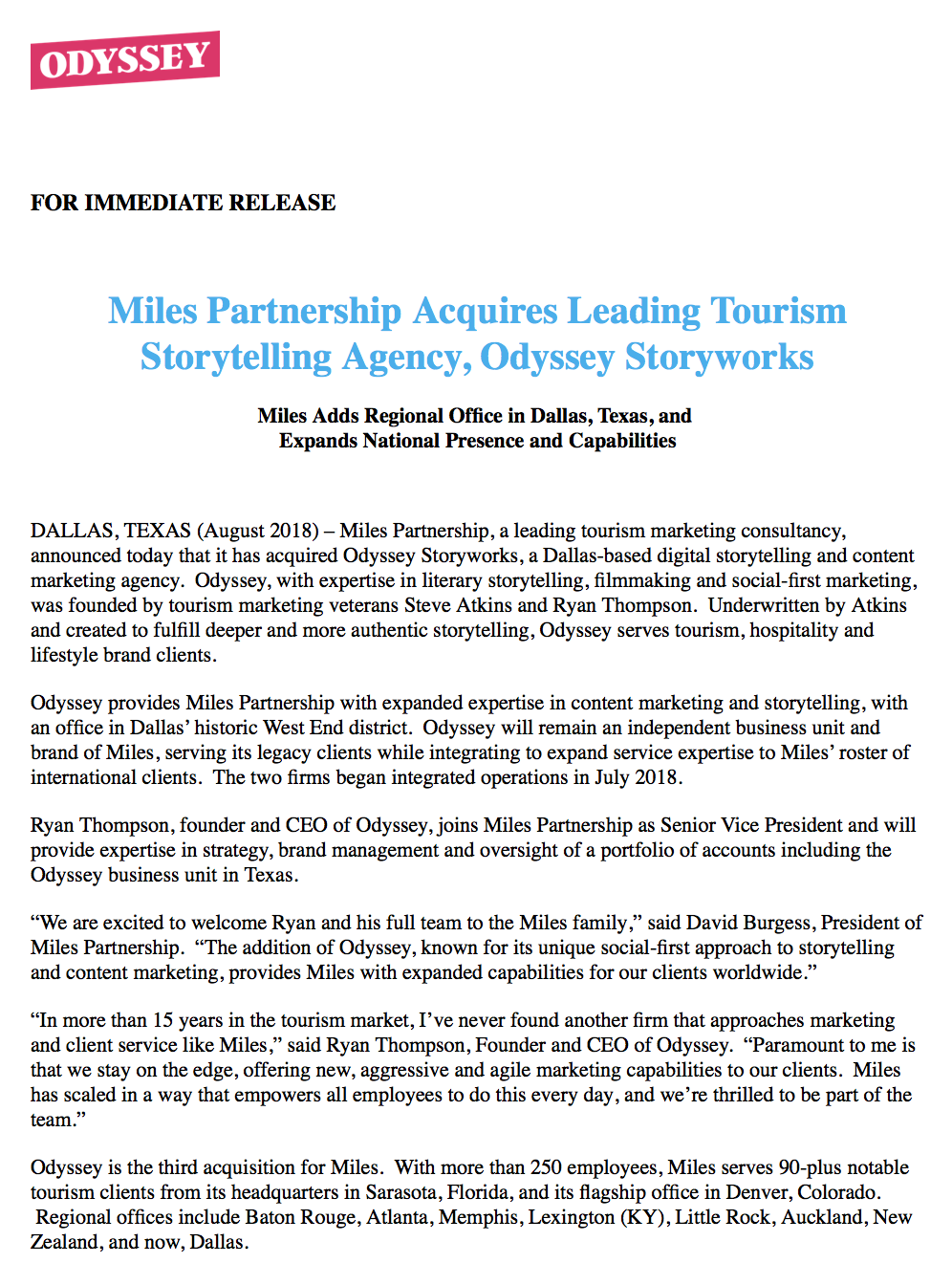 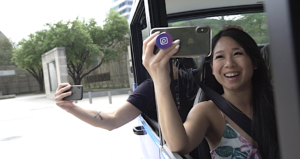 A fresh, innovative, UGC iteration comes to town—starting in Dallas. User Directed Content (or “UDC”) is a new approach that’s helping to make and tell stories in a completely different way. Is it authentic, humanized content? Absolutely!]

The Travel Vertical talked to Ryan Thompson, Founder and CEO at Odyssey Storyworks. Using the 50th Anniversary of the Frozen Margarita as the focus and Visit Dallas as the partner, a wild new concept of UGC was put through its beta paces…and brilliantly done, by all accounts.

The 50th Anniversary of the Frozen Margarita. It was the brainchild of Mariano Martinez, current owner of Mariano’s Hacienda in Dallas. #DidYouKnow? The original frozen margarita machine now permanently lives in the Smithsonian National Museum of American History.

Everybody wants the video, nobody wants the production spend. But what if we could use real people to help shoot video with their smartphones while providing them with real-time professional direction and shot lists? Focusing on the Frozen Margarita, that’s exactly what happened when folks fanned out to hit any and all of the Mexican restaurants/bars along “The Margarita Mile” near Mariano’s.*

*This is Dallas…there are plenty.

“One of the things we’ve tried to do is bring UGC video forward as a storytelling vehicle,” Ryan explains. “But it’s the wild west out there. You can get something terrific or something that’s not appropriate.”

The project requires a shot-by-shot needs list, a production facility to receive and upload videos in real time, professionals to provide live direction on angle, lighting, closeups and more to the contributors as they shoot. Skilled editors support project, working through hundreds of hours of content directly provided by consumers.

A new video is released very three to four weeks over a period of nine months.

The real time process replaces a typical three-week shoot. In addition to big cost savings and high shareability, Ryan suggests that, “You end up with the best of professional applied to the best of the spontaneity and enthusiasm of real people.”

-> Hear from Ryan Thompson in person at eTourism Summit, Oct. 10-11, 2018. He’ll also be on hand at Pre-Conference Day on Oct. 9, 2018  to guide the Smartphone Video Storytelling Workshop. See the agenda and registration details.