“It’s gonna get ugly,” cautions Search Engine Watch in their reporting on this weekend’s change, “Google is Removing All Right Hand Side Ads on SERPS Worldwide, Agencies Weigh In.” The Media Image, which broke the story last week agrees, saying the latest move will have “massive repercussions for search advertisers.”

Sharp-eyed internet watchers may have noticed that as of Feb. 19, AdWords on the right side of search results are gone. They’ve been moved: four to the top and two or three to the bottom of search results page one in a worldwide move that was being tested, but wasn’t widely touted.

Expert observers indicate that the impact on SEO will be significant, pushing organic results entirely below the fold. “The change also will drive-up competitiveness with fewer ads at the top,” notes one ad executive. The fourth spot will intensify competition for the top slot, increasing auction pressure, notes another. 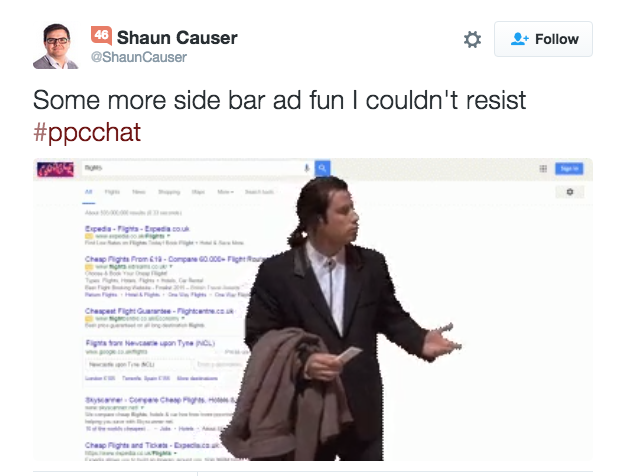 The debate continues as to whether CPCs are going to skyrocket. Join the conversation at #ppcchat or read some of the FAQs addressed by SearchEngineLand here.

Alternatively, have a laugh at the John Travolta animated GIF on this guy’s Twitter  account at https://twitter.com/ShaunCauser.