Will Google, Facebook, Twitter, etc. ever slow down on updating algorithms, tweaking platforms and driving us marketers around the bend? No.

Q: On average, how many changes does Google make to its algorithm per day?

A: Moz says Google makes changes more than daily, about 500-600 times a year. We’ll gather reactions to platform changes that impact our community. Send us your comments or contribute a post.

In a mystery move that nobody can “favorite,” Twitter removed share count statistics when we weren’t looking, effective just before Thanksgiving. Here’s the backstory. 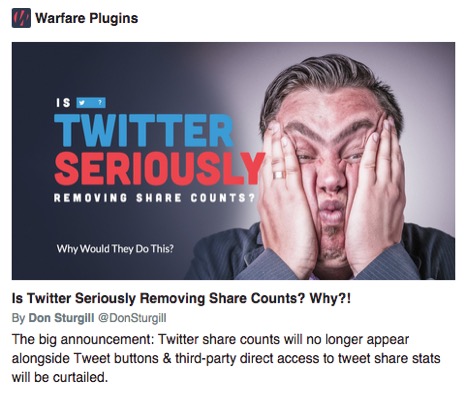 Why did the social proof go poof? According to digital media expert Jay Baer in his analysis, “Where’d the numbers go?” the Twitter response about APIs, engineering tradeoffs and framework mechanics aimed at developers just doesn’t stack up. Instead, he says, “Twitter wants to own all the data (not just share counts) because once they do, they can compel you to either pay them for the data…”

Of course, says Baer, Twitter will move the share analytics data exclusively onto a dashboard that features their advertising options. “Ta-da,” says Baer; if you’re reading this you’re in the top 1% most experienced social media and digital marketing practitioners in the world. And, Twitter wants to talk to you.

Some major publishers will turn to enterprise analytics platforms or Twitter’s Gnip subsidiary, costing $500 to $50K per month, to measure their progress on social media. But for smaller publishers, there’s no question that this is a kick in the teeth for data collection and ROI reporting.

Even digital publishing giants are pissed off. Huffington Post drives the point home in “Why Twitter Shouldn’t Remove the Count From Tweet Buttons” with this graphic. 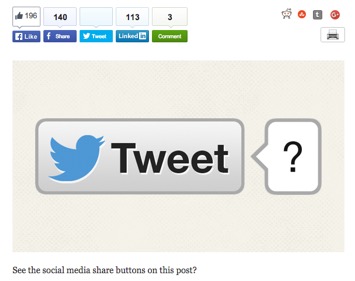 MarketingLand reports that those most concerned with internal tracking of how well articles are performing on Twitter might want to have a look at a free Chrome plugin created by BuzzSumo that also shows sharing totals for Facebook, LinkedIn, Pinterest and Google+. Twitter shares are no longer available from the official Tweet button, but you can see the number of sharers with this extension though by logging in to BuzzSumo.