Deep in the San Fernando Valley, The Pan Am Experience recreates the experience of flying aboard a luxurious 747. Dinner guests are transported back in time to the late ‘60s/early ‘70s, when flying was glamorous and Pan Am was an elite airline.

Two Pan Am memorabilia collectors became the co-founders, perfecting all the details that make the Pan Am Experience a smashing success. The event has been largely sold out since it began in 2014. Read more in Forbes here. 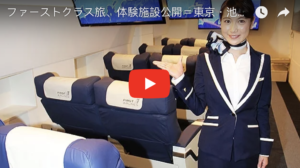 A similar phenomenon is being staged in Tokyo. Japanese airline-themed restaurant First Airlines, offers visitors a first class flying experience that includes a virtual reality immersive tour of Hawaii, New York, Paris, or Rome. The “in-flight meals” are themed around the country of destination for the evening’s flight and served from airline trolleys.

It’s the VR destination video portion of the flight that makes First Airlines unique. It also plays “relay video” featuring pre-taped interviews of locals who describe what it’s like to live in their destination cities. Read more and see a video in Tnooz here.