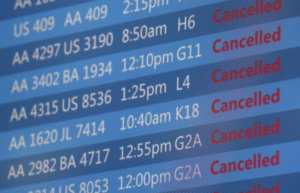 I want to share our experience from eTourism LABS on March 14-15 in Philadelphia–where over 30 percent of the speakers had flights cancelled due to a late winter blizzard that dumped up to a foot-and-a-half of snow in parts of Pennsylvania, shut schools, cancelled flights and wreaked havoc. We learned several things that you may want to pass along to your convention sales team, hotels or anyone who works with organized meetings.

On Monday, March 13, as I was flying to eTourism LABS conference and logged on to my inflight Wi-Fi, email alerts began popping up every 10 minutes from presenters whose flights had been cancelled. By the time I landed five hours later, it appeared that 17 out of 43 speakers were not going to show. In short, it was every meeting planner’s nightmare. Meanwhile, attendees and the remaining speakers began emailing and calling us to see if the event was even still going to be held.

We contacted our hotel procurement expert to see if it was possible contractually to cancel and she responded that our agreement indeed contained her favorite “f-word” (Force Majeure) so we could cancel at any time since airlines announced that 6,000 flights had been cancelled the day before the storm.  Well, I can tell you it wasn’t my favorite f-word!  The hotel pick-up manifest showed that most of the attendees had arrived, so we decided to live stream speakers in and hope for the best. It was now 14 hours until show time.

Our team—Sofia Williamsson in San Francisco and Florian Hermann on-site in Philadelphia—immediately moved  to upgrade the hotel Wi-Fi to ethernet level and began communicating with speakers about their abilities to make their presentations via Skype. They then worked with the hotel’s AV team—who knew nothing about Skype– to practice toggling between Skype and live presentations.

The next morning we determined that all but six DMO and Attraction attendees somehow found their way to Philadelphia and, by the end of the day, delegates from all three tracks reported no serious Skype delays in the program—though quality of transmission varied depending on the strength of the speaker’s Wi-Fi connection.

We want to help other meeting planners and schedulers with what we learned from our own live streaming experience with eTourism Labs in Philadelphia by sharing the following:

Other alternatives to Skype are Google Hangouts, Facebook Live, Periscope and even Apple Facetime, which can all be used if you’re desperate and just need a talking head. (Note that Turkey’s president, Recep Erdoğan, repelled an entire military coup using Facetime.)

Everyone from our team agreed that attendees bonded more with each other as well as with presenters and sponsors, as the sense of shared hardship due to Mother Nature’s elements was outside anyone’s control.

How to Rank Number One in Google: A Study of One Million Pages
Photos From eTourism LABS in Philly